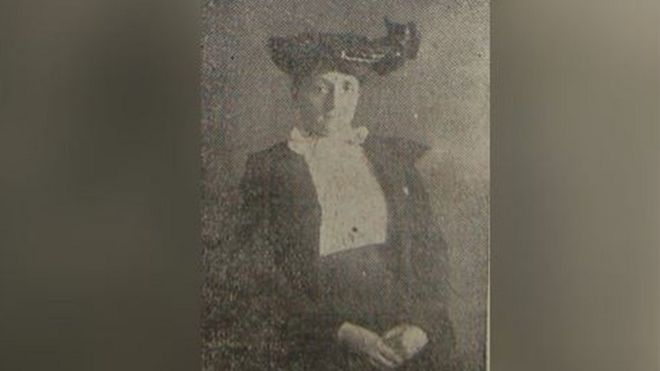 The untold story of the murder victim of the last man to be executed in north Wales is being brought to life following new research.

Gwen Ellen Jones, 35, was murdered on Christmas Day 1909 by William Murphy. A jury found him guilty and he was hanged on 15 February 1910.

Dr Hazel Pierce discovered Gwen’s story and said she deserves “to be remembered in her own right”.

Murphy, 49, is known as being the last man to be hanged at Caernarfon Gaol.

A large crowd had gathered outside the prison walls and the bell of the local church tolled just before 08:00 to mark the execution.

Murphy had first strangled and then cut Gwen’s throat and was said to have shown “indifference” to the crime. He was reported to have left the dock after sentence was passed with a “cynical smile” on his face.

Following new research revealed by Bangor University’s Colclough Centre for the History and Culture of the Book, a History Points QR code has been placed at Cae Star, Bethesda – the site of Gwen’s family home, to commemorate her life.

Ms Pierce spent about six weeks building a picture of Gwen after coming across her name while working on the project.

“The focus in the press was always on her murderer,” she said.

“It’s only right and proper that she’s remembered as the full, rounded person she was.

“I used census records to find out what her life was like, the circumstances of where she was living.”

Ms Pierce, an associate member of the centre added: “I found a birth certificate of her son, suggesting he was William Murphy’s son.

“She represents what a lot of women have suffered and gone through in those days.

“She took in an adopted daughter despite the strain on family life.”

Speaking of the app, Ms Pierce said “it brings history to life” and hopes it will encourage people to “learn about history”.

Who was Gwen Ellen Jones?

Born in Blaenau Ffestiniog in 1874, Gwen was the daughter of a slate miner.

After her mother died, the family moved to Llanfairfechan where, in 1898, Gwen married Morris Jones, a labourer in the stone quarry.

She also adopted two-year-old Gwladys Jones, who had been born in a workhouse and abandoned by her mother.

Gwen took in washing to help make ends meet, and through this, met Murphy.

A powerfully-built man, Murphy had been in the Army and served in India and South Africa. They soon began an affair.

Murphy, a jealous man, become violent towards her. In 1909 while he was working away, Gwen attempted to leave Murphy and took up with a different man in Holyhead.

She may have resorted to prostitution to increase her meagre income and make her independent of Murphy.

Murphy arrived back in Holyhead in December and discovered Gwen living with another man.

On the night of 25 December, outside the Bardsey Island Inn, he persuaded Gwen to go for a walk with him. This was the last time Gwen was seen alive.

Gwen was laid to rest in an unmarked pauper’s grave, her son and adopted daughter were taken into care and sent to different homes.

Ms Pierce said: “Gwen Ellen Jones was a person in her own right, she made mistakes, but she also showed resilience and kindness.

“She was important to her family as a mother, daughter and sister and that is how she should be remembered and not merely as a woman who was murdered by William Murphy on 25 December 1909.”