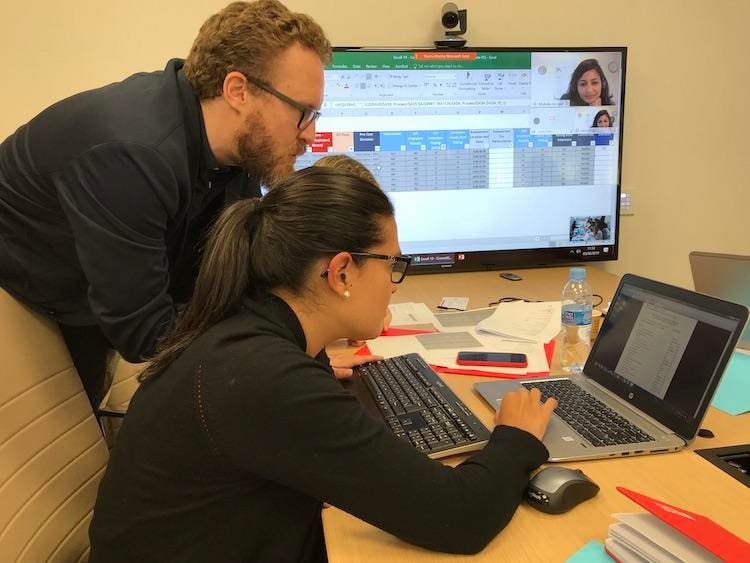 During an intense admissions committee meeting at IESE Business School, MBA gatekeeper Pascal Michels looks over a candidate’s stats with Andrea Hayem, an associate director of admissions. Associate Director Malvika Kumar is calling in from India to present her candidates.

PHOTO BY JOHN A. BYRNE

Tens of thousands of prospective MBA students will be feverishly working over the next few weeks to meet the round one application deadlines for some of the world’s most prestigious and highly selective business schools.

What will happen to those applications once they land at the schools? How will candidates be assessed? How often do those assessments line up with the more positive descriptions of the admissions process described on school websites?

Inspired by Jacques Steinberg’s classic book, The Gatekeepers, which brought readers inside the admissions process of Wesleyan University, I’ve made it a campaign of sorts to gain access to the admission committee meetings at which MBA applicants are admitted, rejected, or waitlisted. In Steinberg’s gripping exploration of prestige college admissions, he had the chance to observe the Wesleyan gatekeepers close up.

In recent years, I too have been a fly on the wall at three highly prominent and prestigious business schools in the U.S., Canada, and Europe. I sat quietly and observed the behind-the-door proceedings of how admission officials discuss candidates and come to their often controversial decisions at Boston University’s Questrom School of Business, the University of Toronto’s Rotman School of Management, and IESE Business School in Spain.

What makes or break an MBA applicant? How important are GMAT or GRE scores and undergraduate transcripts? What difference does your essay or admissions interview make? How important is your work experience and accomplishments?

Surely, all of these things matter in an MBA applicant. But the single biggest surprise at all three business schools for me was the importance of personal contact with a school, its students and the admissions officials making decisions. Time and time again, at one admissions committee meeting after another, I’ve heard gatekeepers describe how they met a person at a coffee chat, open house or admissions event. Their impressions carried un due weight over who got admitted and who didn’t.

In some cases, the interactions prospective students had with an admissions staffer—who can easily be won over as an enthusiastic advocate for an applicant—was critical to getting admitted and even being awarded a scholarship. While the raw stats are always read off and often discussed, the air time devoted to GMAT scores often pales in comparison to conversations about applicant meetings.

If you’re on the margin as many candidates are given the self-selection that goes on in elite MBA admissions, those contacts and your expression of keen interest in attending a particular program go a long way to getting a “yes” out of the meeting.

At IESE Business School, the leading business school in Spain, I recently observed the admissions committee debate an MBA candidate with a 620 GMAT score, roughly 45 points below last year’s 686 average for the incoming class, get into the school despite challenges from the school’s head of admissions. Why? Because two of his staffers met the applicant and were impressed by her, even though she was being   reviewed in the fourth and final application round at the school when the vast majority of the seats were already taken.

“So she comes in late with a low GMAT?” asked a highly skeptical Pascal Michels, the admissions director at IESE

“It is low,” concedes Malvika Kumar, an associate director of admissions at the school.

“But her academics are strong, and she’s a good candidate,” retorts Kumar, who had met the candidate.  “I think we would love her if she comes to our class, and I believe she would be one of the best students in the class.”

Michels’ eyebrows are raised. “Are you telling me you want to fight for her?”

“Yes,” responds Kumar. “She has already saved enough money for half of the tuition and is in conversations with her company to pay the rest. She has a verbal agreement to go back to her company in India and that is rare.”

Another admissions official, Natalia Antip, is sitting close to Michels and wants to lend her colleague some support. “She had a very good story about becoming an independent woman from a family that was very conservative,” says Antip. “If we wait another year, I think she’ll have too much work experience.”

The candidate was ultimately admitted.

When I sat in on the MBA admissions committee at Boston University, I saw officials put forth all the key elements of an applicant’s file were presented in a way that seemingly gave each metric equal consideration and weight. The discussions of each candidate were always civil and respectful, even when some obvious disagreements emerged among the committee members. It’s not uncommon for a committee member to say that he or she “loved” the interaction they had with an applicant or that a candidate is “a good fit with our culture.”

That’s not to say that the committee is sometimes surprised at what they see. When the undergraduate transcript of an international candidate from Asia revealed several “D” grades, one admissions official observed, “These grades are awful.” In assessing the interview of another candidate in consulting, another admissions staffer concluded “he presented a little bit scattered. He would answer but got sidetracked and it was a little bit distracting.” On yet another profile, still another official noted: “Her grades and academic performance are all over the place.”

And at the Rotman School of Management at the University of Toronto, it was clear that meeting up with admissions officials gives a candidate a real advantage. During the discussion of a 24-year-old female consultant with a GMAT of 630, an assistant director of admissions at Rotman helps to seal the deal on the admit with this comment:  “I have seen her at two fairs and a lot of events,” she said. “She seems to be very well researched in terms of doing her MBA. She is really personable. You can tell she is quite bright. I definitely concur with what you’ve said from my interactions with her.”

The bottom line: Sure you need the basic stats to get into a good MBA program, but make sure you also take the time to schmooze with a school’s admissions staff.