MBA aspirants in Maharashtra up 85% in last 5 years

Picture used for representational purpose only
MUMBAI: The number of students taking the common entrance test (CET) to join Master of Business Administration (MBA) and Master of Management Studies (MMS) courses has gone up by 85% in the state over the last five years. 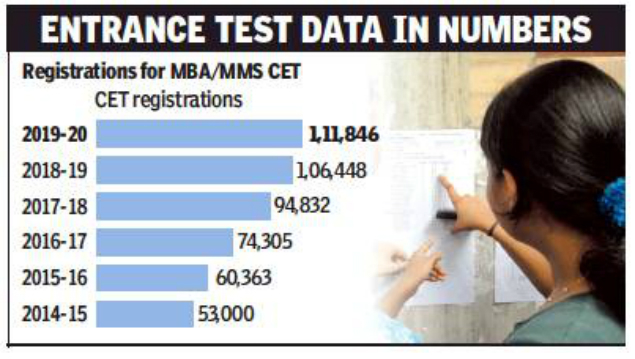 In 2015-16, a little over 60,000 applied for the state’s CET, which has gone up to 1.12 lakh this year. Last year, CET registrations crossed the 1-lakh mark for the first time. The test is being held across 112 centres in the state on Saturday and Sunday.

Though registrations for colleges are yet to begin, last year there were around 35,000 seats in the centralised admission pool. With a little increase in the number of seats expected, the competition will continue to remain stiff with over three students competing for one seat.

MBA education consultant Llewellyn D’Souza said that students usually tend to go for MBA if there are not enough ideal jobs available. “If one sees the data for the last 20 years, people tend to spend the first few years after their graduation in getting an MBA degree, if there are not enough jobs available in the market. Though I am not sure if that is the case now, the rise in numbers could also indicate that students who are not confident about getting into the top IIMs, prefer going to a B-school closer home and therefore, register for the state CET,” said D’Souza. He added that a growth of 85% applicants in five years is huge.

The growth in numbers is a good sign, said professor Rajesh Srivastava, head of department for marketing & research at Sydenham Institute of Management Studies, Research & Entrepreneurship Education. “MBA degree gives more opportunities and status,” he said. But as per economic theory reported earlier in International Journal on Education, when job opportunities are few many go people for higher studies, said Srivastava. In the US, the number of students going for higher studies was higher in the recession years, he added. “This is also confirmed by the unemployment data released for the current year as there are not enough jobs for undergraduates in the country,” he said.

The numbers started increasing from 2015-16, said Hemang Panchmatia, programme director at a leading coaching institute. The year-on-year jump in registrations from 2015-16 to 2017-18 has been on the higher side and in one year the increase was even up to 30% (see box). But for the last three years, the growth has been somewhat steady, he said. Apart from the job scenario in the country, the redundancy of the AICTE conducted common management admission test (CMAT) also could be responsible for the increase in numbers of CET aspirants, he said.

On Saturday, most students found the first slot of the test slightly tougher than last year. The logical reasoning section had sets that were time-consuming, making it difficult. The test of quantitative aptitude contained easy to medium calculation intensive sets, while the test of verbal ability was easier than last year. Based on the analysis of the first slot and assuming all other slots over two days will be at the same difficulty level, the total score of 131-133 is likely to fetch a percentile of 99.90, said Panchmatia.