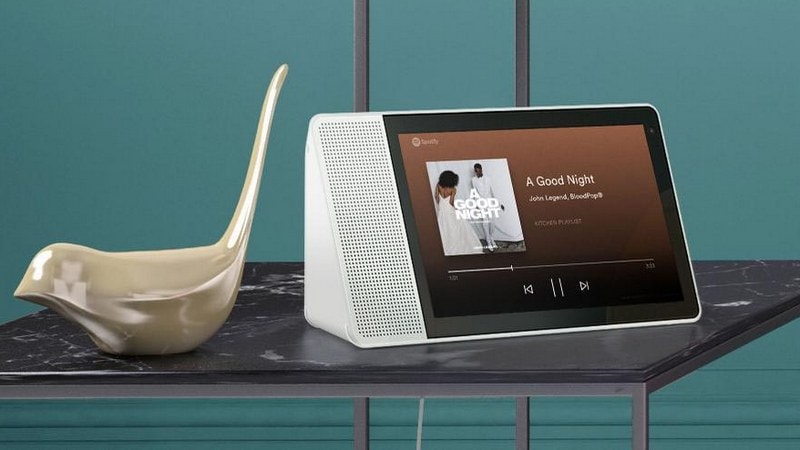 Google’s not backing down in the fight for the smart home. On Thursday, the tech company said it’s releasing the first of several home assistant devices with screens slated for the summer.

The Smart Display, built by Lenovo and running Google’s Android Things software for Internet-connected devices, hits stores this weekend. Like Google’s Home, Home Mini and Home Max, the Smart Display lets you control it with your voice, and focuses on playing music. But it also has either an 8-inch or 10-inch screen, on which you can watch YouTube videos, have a video chat or get better answers to some questions.

The Lenovo Smart Display is the first of several similar devices that Google revealed in January, at the CES technology trade show. JBL, Sony, and LG were also set to release Google Assistant devices with screens in the summer.

It may seem puzzling for smart speaker makers to add yet another screen to the home, when the point of voice control is that you don’t have to touch a thing.

But adding a screen gives Google a better way to answer questions about things that require some visual assistance. Recipes, for example, benefit from short videos or written instructions rather than a robotic voice reeling off ingredients. A screen augments other information, too, such as restaurant suggestions that can show pictures of favourite dishes, or a peek at the five-day forecast when you ask for today’s weather.

“Our research shows that consumers want a richer experience,” Adam Wright, researcher at marketing intelligence company IDC said. Down the line, the implications for connecting these devices to Google’s growing entertainment plays and its interest in home security will make screens even more valuable, he said.

Asking questions is the second-most common use for a smart speaker, after listening to music, according to the research firm Activate. Google’s background in search gives it a strong foundation on which to own this part of the smart speaker skill set.

Capitalising on that may also help Google reach a broader audience for its smart speakers, which are appealing to a fairly narrow demographic.

“The average smart speaker user profile is still that of an early tech-adopter: an affluent, older millennial male,” research firm eMarketer found in a May survey. “But the gap is narrowing quickly as the device gains traction among other demographic groups, particularly younger Gen X women with children.”

Amazon has released a few devices that use the screen in conjunction with voice as part of its aggressive smart home play, including the stand-alone Echo Show – a clear competitor for the new Smart Display. Amazon has also taken some of the layout for visual answers from Show and applied it to the television and also its tablets.

Google has roughly 30 percent of the smart speaker market to Amazon’s 66 percent, while other competitors such as Apple make up the remainder, according to eMarketer.